Production from the South Africa region of 1.21Moz was 412,000oz or 25% lower than 2011. The operating environment in South Africa remained challenging, with increased safety-related stoppages imposed by the Department of Mineral Resources continuing to be disruptive, especially in the first half of the year. An industry-wide, unprotected strike straddling the third and the fourth quarter also affected the operations. The total loss of production as a result of the strike and the subsequent safe return and ramp-up to full production, is estimated at around 235,000oz. Seismicity at Mponeng and TauTona also had a negative impact on production.

Production from the Continental Africa region decreased by 3%, or 49,000oz to 1.52Moz. Obuasi’s production was 11% lower than the previous year at 280,000oz due to lower grades, equipment availability and late stope preparation combined with the change in the contractor. Sadiola’s production fell 17% to 100,000oz due to a decrease in recovered grade limited by availability of oxide ore sources. At Morila, production was 18% lower at 81,000oz due to the processing of marginal stockpiles, compared to full-grade ore in the previous year. Iduapriem’s production declined 10% to 180,000oz in 2012, mainly a result of lower recovered grades. These shortfalls were partially mitigated by 7% higher production at Geita of 531,000oz.

Australasia’s production increased by 5% to 258,000oz in 2012 as production rates increased at Sunrise Dam following the remedial work to repair damage caused by a pit wall failure in 2011.

Operating profit for the year decreased from $2,202m in 2011 to $1,127m in 2012, mainly as a result of reduced gold income due to lower production levels at the South African operations following the strike action and increased safety related stoppages, higher operating costs, impairments and derecognition of assets, as well as an increase in exploration and evaluation costs.

All partly mitigated by:

An increase of $33/oz in the group’s total cash cost was attributed to the strike action in South Africa.

Other items which further increased total production cost include:

Partly mitigated by the following:

3. Loss on non-hedge derivatives and other commodity contracts

The loss on the non-hedge derivatives increased from $1m in 2011 to $35m in 2012 and relates to the unrealised movement on the Mine Waste Solution onerous gold contract acquired during the year. The increase in the onerous contract liability from the date of acquisition until year end was mainly due to the significant increase in the gold price.

Corporate administration, marketing and other operating expenses increased by 9% from $305m in 2011 to $332m in 2012. The increase is attributable to:

This was partly mitigated by less due diligence expenditure in 2012, lower governmental fiscal claims, as well as a weaker SA rand to the US dollar.

Exploration and evaluation costs (excluding equity accounted joint ventures) increased by 42% from $279m in 2011 to $395m in 2012. This was primarily due to the increased level of expenditure at Mongbwalu in the DRC, La Colosa in Colombia, Siguiri in Guinea, Tropicana in Australia and increased brownfield exploration activities at the operating mines.

This is made up as follows:

Significant movements include the following:

6.2 Indirect tax expenses and legal claims which include net impairment for non-recovery of VAT and fuel duties in Argentina, Colombia, Guinea and Namibia amounting to $29m and the Westchester/Africore Limited legal claim in Ghana for $11m.

Special items are summarised as follows:

Capital expenditure is summarised in the table below.

The project capital expenditure increased by $552m or 103% to $1,086m and is attributable to investment in the growth projects such as Tropicana, Kibali, Cripple Creek & Victor and Mponeng.

In light of the strikes which occurred at the South African operations during the third quarter of 2012, and management’s intention to maintain balance sheet flexibility, the capital expenditure budget for 2012 was reduced from $2.2bn to $2.1bn in the fourth quarter of 2012. Going forward, projects will be reviewed with regards to their timing and expected returns.

Capital expenditure is summarised as follows:

An abridged statement of financial position as at 31 December is presented and variations in balances are commented on below:

The statement of financial position reflects an increase in tangible and intangible assets to $8.0bn mainly financed by net debt (excluding the mandatory convertible bond) which increased from $0.6bn in 2011, to $2.1bn in 2012. This significant increase was mainly due to:

Other significant events that impacted the statement of financial position were:

The statement of financial position strengthened with tangible and intangible assets increasing from $6.7bn in 2011 to $8.0bn in 2012. This increase was mainly due to capital expenditure of $1,773m (excluding that of joint ventures) incurred during the year, tangible and intangible assets from the First Uranium (Pty) Limited acquisition in the amount of $630m, partly offset by net impairments and derecognition of tangible assets of $356m (refer special items note 6 to the income statement), the exchange effects of local currencies against the US dollar of $120m, and amortisation and depreciation of $798m.

Investments in equity accounted associates and joint ventures increased by 51% to $1.1bn in 2012.

During the year, some $300m was spent on the Kibali joint venture for project development. In addition, AngloGold Ashanti disposed of 5% of its interest in Rand Refinery Limited, resulting in Rand Refinery being accounted for as an associate at year end.

Other assets increased from $2,253m in 2011 to $2,780m in 2012. Other assets consist mainly of inventories, deferred tax assets, cash restricted for use, trade and other receivables, and other investments.

This was all partly offset by:

Borrowings and related facilities are summarised as follows:

Other liabilities have increased from $1,990m in 2011 to $2,575m in 2012. Other liabilities consist mainly of provisions for environmental rehabilitation, pension and post-retirement benefits, trade, other payables and deferred income, financial derivatives and taxation payable.

This was all partly offset by:

An analysis of the abridged statement of cash flows is presented and significant variations in balances are commented on below:

The decrease in the closing cash position followed from the lower production and higher operating costs and capital expenditure. In addition, $550m net cash was paid for the purchase of the non-controlling interest in Serra Grande and the acquisition of First Uranium (Pty) Limited.

The movements in production and operating costs decreased cash generated from operations by $740m from $2,923m to $2,183m in 2012. Movements in working capital resulted in a net outflow of $218m in 2012, compared with a $170m in the prior year, and were due to increased levels of trade and other receivables and inventories, partly mitigated by higher trade and other payables.

2.2 Net proceeds from the (acquisition) and disposal of tangible assets, investments, associates and joint venture loans was $399m in 2012, compared with $177m in 2011. In 2012, some $300m was advanced to Kibali joint venture for project development. In 2011, the most significant movements were the acquisition of a non-controlling interest in First Uranium Corporation for $30m, and additional investments in associates and joint ventures primarily for exploration funding of $115m. The balance of the movements relate mainly to real estate activities in Brazil, investments in the environmental rehabilitation trust funds, and other sundry investment purchases and disposals.

2.3 Net subsidiaries (acquired) disposed was a net outflow of $355m in 2012 compared with a net outflow of $2m in the prior year. In 2012, the most significant movements were the acquisition of First Uranium (Pty) Limited for $335m as well as the purchase of the remaining 50% interest in Serra Grande for $220m less $5m for dividends declared and paid to non-controlling interests. First Uranium (Pty) Limited reported $5m cash at the date of purchase and Rand Refinery Limited reported $31m cash on date of partial disposal. In 2011, the company disposed of its investment in ISS International for $9m and it reported $11m in cash at this date.

Borrowing proceeds mainly included proceeds of $100m from the $1bn syndicated loan facility which was repaid during 2011. 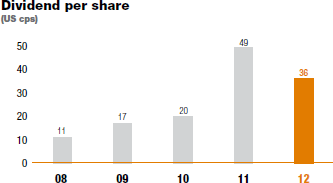 The company remains committed to focusing on the cash returns to shareholders whilst considering cash flow, investment needs and the financial strength of the business in the context of delivering on its business plan and strategic growth objectives.

The unprotected strike action at the South African operations, which started late in the third quarter, had an adverse impact on the company’s results. During October 2012, following the downgrade of the South African sovereign ratings, Standard & Poor’s (S&P) announced that the company was being placed on credit watch negative, which may result in downgrading the company’s credit rating below investment grade. On the basis of these developments and management’s efforts to decrease expenditures whilst retaining confidence in the long-term outlook, the Board reduced its third quarter dividend to 50 South African cents per ordinary share.

Subsequent to the company being placed on “credit watch negative” during December 2012, S&P reaffirmed the investment grade rating albeit with a negative outlook. AngloGold Ashanti remains the only South African mining company not to be downgraded by S&P.

SIGNIFICANT ACCOUNTING MATTERS DURING THE PERIOD

On 29 May 2012, AngloGold Ashanti, which held, through a subsidiary, a 50% interest in Serra Grande mine in Brazil, agreed to acquire the remaining 50% stake in the mine from Kinross Gold Corporation for $220m in cash. The transaction closed on 28 June 2012.

On 20 July 2012, AngloGold Ashanti acquired First Uranium (Pty) Limited, the owner of Mine Waste Solutions in South Africa, for a cash consideration of $335m.

On 23 July 2012, AngloGold Ashanti announced that it had signed a new US$1bn, five-year unsecured revolving credit facility (RCF) maturing in July 2017 with a banking syndicate. The facility replaced the four-year, US$1bn unsecured RCF maturing in April 2014.

On 25 July 2012, AngloGold Ashanti announced the pricing of an offering of $750m aggregate principal amount of 5.125% notes due 2022. The notes were issued by AngloGold Ashanti Holdings plc. a wholly owned subsidiary of the company, at an issue price of 99.398%. The company received net proceeds from the offering of $737m, after deducting discounts and estimated expenses. The notes are unsecured and fully and unconditionally guaranteed by the company.

The consolidated and company financial statements are prepared in compliance with International Financial Reporting Standards (IFRS) and Interpretations of those standards, as adopted by the International Accounting Standards Board (IASB) and applicable legislation.

In 2013, the group will adopt IFRIC 20. The group expects IFRIC 20 to have an impact as a consequence of moving from a life-of-mine strip ratio to a strip ratio applicable to a component of an ore body. IFRIC 20 considers when and how to account separately for the benefits arising from stripping activities in the production phase, as well as how to measure these benefits both initially and subsequently. The benefits that can accrue to the entity in an open-pit mine include: usable ore that can be used to produce inventory and improved access to further quantities of material that will be mined in future periods. IFRIC 20 only deals with waste removal costs that are incurred in surface mining activity during the production phase of the mine ‘production stripping costs’) and thus does not have an effect on the accounting for the development of an open-pit mine or on underground activities. The group is still evaluating the financial impact of IFRIC 20.