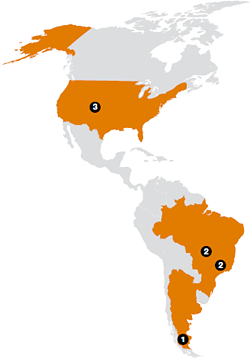 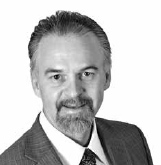 The Americas Region is an important growth area for AngloGold Ashanti, with operations in Argentina, in Brazil, and in the United States.

Extensive exploration activities are being conducted in the region by either AngloGold Ashanti teams or together with joint venture partners, in Canada, Brazil and Argentina. See Review of exploration for further details. 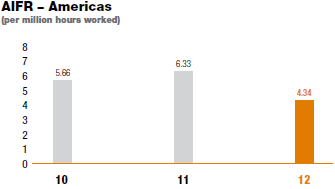 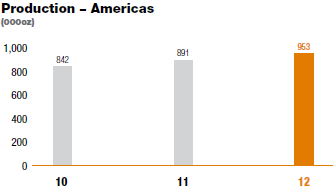 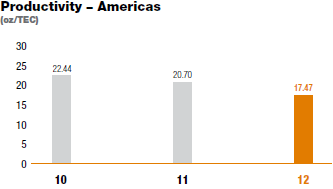 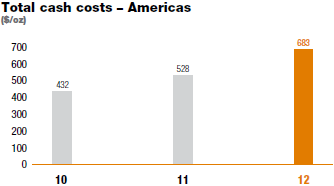 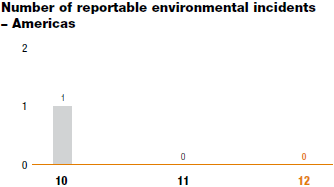 Performance in the Americas Region in 2012

Safety
Regrettably, there was a fatal accident at the Cerro Vanguardia mine in January 2012, the first fatal accident at this mine since July 2002. The all injury frequency rate for the region improved to 4.34 per million hours worked.
Production
Combined production from the operations in this region increased by 7% to 953,000oz (2011: 891,000oz) in 2011. These operations now contribute about 24% towards group production (2011: 21%).

The increase in total cash costs was largely a result of inflationary effects in all countries, especially Argentina; lower by-product credits in Argentina and Brazil; higher costs for equipment maintenance and some contract and technical services in Argentina and the United States; and higher labour and operational development costs in Brazil. The Americas Region had the lowest regional cost within AngloGold Ashanti with CC&V ($638/oz) and Cerro Vanguardia($640/oz) being the lowest and third lowest respectively of all group operations.
Capital expenditure
Capital expenditure was largely invested in the implementation of various projects such as the Córrego do Sítio Sulphide project in Brazil (14%), the MLE/MLE2 projects in the United States (22%), and the heap leaching project in Argentina (5%). Ore Reserve development in Argentina and Brazil (19%), exploration (6%) and other stay-in-business expenditure (32%) complete the balance of the capital investments in the region.
People
An average of 7,896 people in total were employed in the region during the year, 7% more than the 7,389 people employed in 2011. This number was made up of 5,509 (70%) permanent employees and 2,387 (30%) contractors. This figure excludes the more than 1,200 people employed in Colombia and at the greenfield operations in the region. The Americas Region employs around 12% of group employees.

Productivity at these operations is relatively high, at 17.47oz/TEC in 2012 (2011: 20.70oz/TEC).
Communities
Social issues arising from heightened community expectations and ASM, as well as ongoing concerns for security in Colombia are areas of concern for this region.
Environment
AGA Mineração won the Environmental Management Award presented by the state of Minas Gerais. Severe drought again had a significant impact on production at CC&V during the year. Water management and permitting continued to be a challenge in Colombia.
Mineral Resource
and Ore Reserve
At the end of 2012, the total attributable Mineral Resource (inclusive of Ore Reserve) for the Americas Region, was 61.59Moz (2011: 49.29Moz) and the attributable Ore Reserve, 11.01Moz (2011: 10.89Moz). This makes up around 25% and 15% of the group’s Mineral Resource and Ore Reserve respectively.
Growth
Plans are under way to increase production from the Americas Region. At the Brazilian operations, the Córregio do Sítio sulphide project at AGA Mineração is scheduled to reach full production in 2013, with optimisation programmes to be introduced at the Cuiabá and Lamego operations. In the United States at CC&V, following approval of the second mine life extension project, development has begun.
Outlook*
In 2013, production is expected to be between 0.977Moz and 1.048Moz, at a total cash cost of between $669/oz and $694/oz. Capital expenditure of around $503m is planned, mainly on the implementation of MLE2 in the United States (35%), ore reserve development in Argentina and Brazil (16%) and other stayin- business items.