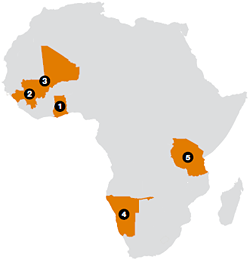 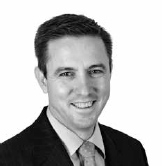 There are eight mining operations in five countries in our Continental Africa Region.

In Ghana, AngloGold Ashanti currently has two wholly owned and managed operations, Obuasi and Iduapriem. They were acquired following a merger between the former AngloGold Limited of South Africa and Ashanti Goldfields Company Limited of Ghana in 2004.

AngloGold has one wholly owned mining operation, Navachab, in Namibia.

AngloGold Ashanti has one wholly owned operation in Tanzania, Geita, the largest single gold mining operation within the group.

AngloGold Ashanti also has an active greenfield exploration programme, principally in the DRC, focused on the Mongbwalu concession and Kibali, a joint venture with Randgold Resources and the DRC government. Refer to page 64 for more information on the programme in Continental Africa. This is in addition to brownfield exploration conducted at and around existing operations. See Review of exploration. 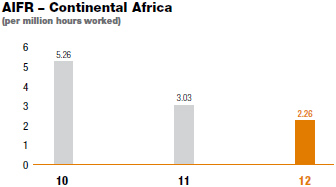 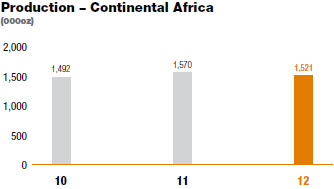 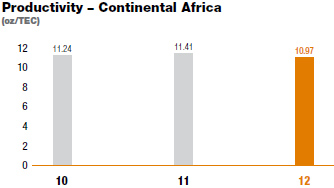 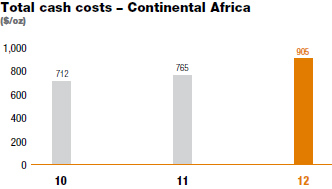 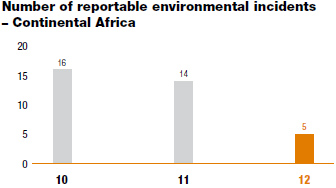 Performance in Continental Africa in 2012

Safety
Regrettably, five people lost their lives in occupational accidents during 2012 (2011: 3), at Obuasi (2) and Iduapriem (1) in Ghana, at Geita (1) in Tanzania and at Mongbwalu (1) in the DRC. The all injury frequency rate for the region improved to 2.26 per million hours worked in 2012 from 3.03 in 2011. Full investigations into the fatal accidents have been conducted and the necessary steps taken to mitigate their re-occurrence.
Production
Combined gold production from these operations decreased to 1.52Moz in 2012 (2011: 1.57Moz), equivalent to 39% of group production. The most significant contributors to the region’s production were Geita (35%), Obuasi (18%), Siguiri (16%) and Iduapriem (12%).

One of the consequences of the potential instability in Mali was its effect on employee morale: staff worked under difficult conditions in addition to being concerned for their families who were evacuated from site. These conditions continue to have an impact on the workforce and our ability to attract and retain appropriate skills.
Communities
Among the critical concerns in the region are social issues arising from heightened community expectations and artisanal and small-scale mining (ASM), as well as security incidents.

The Ajopa resettlement programme at Iduapriem in Ghana has been approved by the Environmental Protection Agency, and has since been followed by a risk workshop to ensure a successful outcome for all stakeholders and the community in particular.
Environment
One of the most significant challenges in this region in recent years has been the management of water, particularly in respect of legacy issues. The completion of a new tailings dam at Iduapriem and commissioning of two water treatment plants at Obuasi in Ghana has significantly improved water management, and enabled the mine to comply with permitting frameworks.
Mineral Resource
and Ore Reserve
The total attributable Mineral Resource (inclusive of the Ore Reserve) associated with the mining operations in Continental Africa totalled 73.01Moz at year-end (2011: 76.50Moz), with an attributable Ore Reserve of 27.59Moz (2011: 28.02Moz). This amounts to 30% of the group’s Mineral Resource and 37% of its Ore Reserve.
Growth
The immediate growth in the Continental Africa region is from the 45% interest in the Kibali joint venture which is in development and is forecast to pour gold in early 2014. In the case of Obuasi, investigations have begun into a new surface decline down to the 50 level to access Obuasi Deeps. Open-pit mining has already started at the Sibi pit. Again some economies of scale are expected from the use of the existing tailings storage facility (TSF), which is stable and has adequate capacity up to 2018.

The Sadiola Sulphide Project (SSP) was delayed by military action in Mali during the year. Critical to its progress was the conclusion of a power purchase agreement in November. The SSP will provide the operation with access to deeper more conformable sulphide material and will also absorb some skills and expertise from the Yatela operation, as it reaches the end of its life.
Outlook*
In 2013, production is expected to be between 1.375Moz and 1.476Moz at a total cash cost of between $911/oz and $945/oz. Capital expenditure of around $722m is planned, mainly on capital expansion projects.