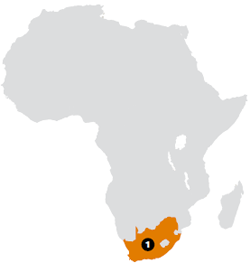 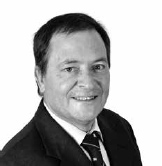 The Vaal River mining operations in the South Africa Region are Great Noligwa, Kopanang and Moab Khotsong. These mines are located roughly 170km to 180km from Johannesburg in the vicinity of Orkney and Klerksdorp, near the Vaal River on the Free State-North West Province border. The three mines share a milling and treatment circuit.

The West Wits operations are Mponeng, TauTona and Savuka. These three mines are situated southwest of Johannesburg, in the vicinity of the town of Carletonville, on the border between Gauteng and North West Province.

The West Wits team conducted an investigation into the incorporation of Savuka, which is nearing the end of its working life, into either TauTona or Mponeng. Post year-end, the investigation concluded that the optimal, most efficient solution to accessing Savuka’s remaining Ore Reserves would be via TauTona’s infrastructure. 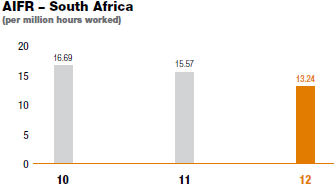 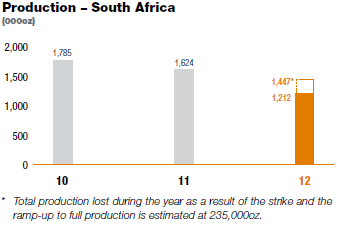 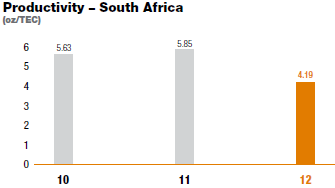 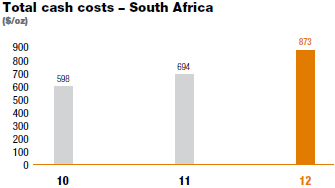 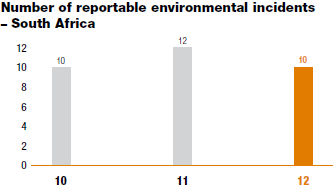 Performance in the South Africa Region in 2012

Safety and health
Regrettably, there were 11 fatalities in 2012 (2011: 9). The number of fatalities remains of serious concern to the company. TauTona achieved 4 million fall-of-ground fatality free shifts in November and Kopanang achieved 1 million fatality free shifts in December, both notable achievements. For the region as a whole, an all injury frequency rate of 13.24 per million hours worked was reported as compared to 15.57 in 2011.
Production
The South Africa Region milled 22.3Mt of ore in 2012, up by 36% on the previous year, primarily due to the acquisition of Mine Waste Solutions, effective 20 July 2012. The Vaal River operations accounted for 582,000oz (48%) of the South Africa Region’s production and the West Wits operations for 631,000oz (52%). Combined, this was equivalent to 31% of group production. In addition, the Vaal River operations produced 1.21Mlb of uranium as a by-product.

Total cash costs for the South Africa region were $873/oz, compared with $694/oz in 2011. Mponeng, with a cash cost of $639/oz, was the lowest cost producer in the region with Great Noligwa, which is approaching the end of its operating life, being the highest at $1,226/oz. Cost increases were largely influenced by reduced production, and higher wages and input prices (energy and fuel). The primary cost components in 2012 were: labour $363/oz; consumables $253/oz; services $68/oz; and other inputs $189/oz.

The operating environment in South Africa remained challenging, with safety-related stoppages continuing to be disruptive, especially in the first half of the year. An industry-wide strike which started in the third quarter and continued into the fourth quarter, halted all mines and plants in South Africa for about six weeks. The total loss of production as a result of the strike and the slow ramp-up to full production, necessitated by geotechnical concerns resulting from the stoppage, was about 235,000oz. Seismic activity at the West Wits operations was also problematic and geological limitations, coupled with lower mining grades at the Vaal River operations and above-inflation cost pressure, presented an ongoing challenge.
Capital expenditure
Capital expenditure in the South Africa Region totalled $583m, an increase of 9.6% on the $532m spent in 2011. The bulk of this was spent at Mponeng ($194m), Moab Khotsong ($159m), Kopanang ($93m) and TauTona ($73m). This brings total capital expenditure in the region over the past five years to $2.27bn.
People
The South Africa operations employed an average of 34,186 people during the year (2011: 32,082), of whom 4,446 (13%) were contractors and 29,740 (87%) permanent employees. This was equivalent to 52% of the group’s total workforce. Productivity per employee for the year was 4.19oz/TEC (2011: 5.85oz/TEC) – the lowest in the group – a function of work stoppages, decreasing grades and the increasing labour intensity of deep level underground mining operations in South Africa.

Roll-out of the Simunye safety and productivity training programme, which began in May 2011, continued. Simunye, which was designed for production crews and supervisors, aims to promote cohesive team work in support of business objectives. By year-end, 67% of all stoping crews and 5% of all development crews in the region had received Simunye team training. Crew performance is monitored continuously to determine the efficacy of the programme. Indications are that the Simunye programme has resulted in improved safety performance, face advancement, volumes mined and sweepings.
Communities
AngloGold Ashanti continues to meet the targets set in its Social and Labour Plans (SLPs). The region has developed a framework to address the socio-economic focus areas within and outside of the business over a three-year period. This involves partnerships with government as well as with social and industry stakeholders to address economic gaps created as the operations mature and production declines. Good progress was made with the group’s housing and accommodation programme – $10m was invested on this in 2012, and conversion of all housing units to single or family accommodation is expected to be completed in 2013.
Environment
The reduction in reportable environmental incidents in 2010 and 2011 was maintained in 2012, with most of these incidents in 2012 taking place at the newly acquired MWS operations. Since taking ownership of MWS in July 2012, considerable resources have been dedicated to ensuring this long-life asset meets AngloGold Ashanti’s rigorous environmental operating standards. The potential for inter-mine flooding and water legacy issues continued to be environmental challenges.

Similarly, access to land and land use are of critical importance, for exploration and mining as well as ancillary infrastructure. The issue of biodiversity has also become increasingly prominent.
Mineral Resource and Ore Reserve
At 31 December 2012, AngloGold Ashanti had a total attributable Mineral Resource (inclusive of the Ore Reserve) in South Africa of 98.60Moz (2011: 97.63Moz) and a total attributable Ore Reserve of 31.56Moz (2011: 32.43Moz), equivalent to 41% and 43% respectively of the group’s Mineral Resource and Ore Reserve.
Growth
Notable progress was made with the Mponeng deepening below 120 level project, which will extend Mponeng’s life of mine. The first phase of this project, which accesses the VCR, is on track to begin production in April 2014. Phase 2, which will access the CLR below the 120 level, was approved by the AngloGold Ashanti board in March 2012. Infrastructure development is under way with production from the second phase scheduled to begin in 2016.

The Moab Khotsong business plan, without growth projects, is expected to produce some 3Moz of gold until 2023. Zaaiplaats will provide an additional approximately 4.8Moz, extending the mine’s life and serving as a gateway for opportunities beyond the initial target block. Phase 1 of the Zaaiplaats project, approved in July 2010 and currently in implementation, is dedicated to establishing the infrastructure for Phase 2, which will create a drilling platform to increase geological confidence within the greater Zaaiplaats orebody while providing some initial gold production. Phase 2 will realise approximately 558,000oz of gold. Phase 3 is currently in prefeasibility study phase. A full feasibility study, to begin in the first quarter of 2013 and to run for about a year, includes various options of accessing the orebody through either Moab Khotsong or Kopanang, while accessing other mining blocks adjacent and contiguous to Project Zaaiplaats.
Outlook*
In 2013, production is expected to be between 1.331Moz and 1.429Moz at a total cash cost of between $777/oz and $805/oz. Capital expenditure of around $506m is planned, mainly on projects at Mponeng and Moab Khotsong.

The current two-year wage agreement expires in June 2013 and, following the recent strike, new wage negotiations have been brought forward and are expected to begin in May 2013. Given that there is a new and significant union in place, the Associated Miners and Construction Union (AMCU), AngloGold Ashanti expects a challenging set of negotiations. AngloGold Ashanti has committed to working with all representatives and employee associations to build relationships.