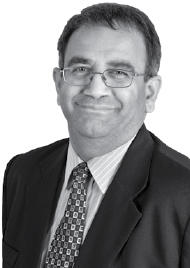 When compared to 2011, the year under review came with a multitude of challenges. These included: increased safety stoppages at our South African operations during the first half of 2012; a protracted strike in the same region during the second half of the year; poor operational performance from the Ghanaian mines in Continental Africa, all of which impacted production, costs, earnings and cash flow significantly. In addition, the group faced a serious threat to its investment grade credit ratings following the strikes in South Africa and the downgrade to the South African sovereign ratings by all three credit rating agencies; and, finally, the need to cash fund acquisitions and key anchor growth projects in South Africa, Continental Africa, Americas and Australia. Unlike the previous three years which saw the gold price rally sharply year on year, 2012 saw the average gold price increase by 6% only, which was insufficient to mitigate inflation and production shortfalls.

Despite the considerable headwinds faced in 2012, the group had a number of successes, notably:

DELIVERY AGAINST FINANCIAL OBJECTIVES SET FOR 2012

The core financial objectives for 2012 as outlined in the previous year’s report were:

REVIEW OF GROUP’S PROFITABILITY , LIQUIDITY AND STATEMENT OF FINANCIAL POSITION FOR 2012

The key financial and operational metrics for 2012 when compared to 2011 are provided below and reflect the adverse impact of the strike in South Africa and the operational issues faced at the selected operations referred to above:

The lower full year gold production of 3.94Moz and inflation saw unit cash costs increase to $862/oz when compared to $728/oz recorded in 2011. The strike in South Africa accounted for $33/oz of this increase. When compared to 2011, although the gold price increased by $88/oz (6%), this benefit was more than offset by a 9% fall in gold production and increased costs due to inflation.

Adjusted headline earnings of $924m or 239 US cents per share were the second-highest on record but represented a 29% decline when compared to 2011. Profit attributable to equity shareholders fell from $1.55bn in 2011 to $0.83bn in 2012. The 47% drop in profit attributable to equity shareholders when compared to 2011 can be attributed to a 9% fall in gold production, cost inflation, higher exploration and evaluation costs, increased finance costs and impairment charges due to the derecognition and abandonment of certain assets, related largely to the Obuasi mine in Ghana.

The returns on net capital employed and equity for 2012 were 14% and 18% respectively, lower than our estimates of 16% and 20%, due primarily to the impact of the strike.

For the full year 2012, cash flow metrics were lower as compared to 2011 due to lower production, the impact of the South African strike and additionally in the case of free cash flow, due to significant investment in the key growth projects:

Net debt level as at 31 December 2012 closed at $2.06bn, $1.5bn higher than the level of $610m at the start of the year. The principal three factors that accounted for the increase in the net debt level were:

Turning to the statement of financial position and the financing facilities available to the group – as a result of the protracted strike at our South African mines during the fourth quarter, AngloGold Ashanti raised R1bn under its Domestic Medium Term Note Programme in South Africa. R700m of this debt matures in October 2013 whilst the balance of R300m matures in January 2013 but has since been rolled over in the local bond market.

The group’s principal US dollar and Australian dollar debt facilities include the following:

Although none of the aforementioned facilities mature within a 12-month period from December 2012, AngloGold Ashanti has been pro-active in removing any imminent refinancing risk. With this in mind, in February 2013, it obtained a term facility for 27 months from a syndicate of three banks for $750m for the sole purpose of financing redemption of the $733m convertible bond, when it matures in May 2014, should this be needed. This facility provides the group with cost-effective insurance and full flexibility to refinance the $733m convertible bond on timings, structures and terms that are most suited to the group. The terms of this facility are similar to the revolving credit facility up until draw down date in May 2014, and once the facility is drawn in May 2014, the terms resemble that of a bridging facility. We believe that this facility addresses any refinancing concerns that may arise over the next few months around the 2014 convert falling due for repayment.

In September 2010, the group issued $789m worth of mandatory convertible bonds that fall due for conversion into equity in September 2013. When this conversion occurs in the third quarter of 2013, at current share prices, approximately 18.14m shares will be issued as a consideration for the bonds converting into equity and the 6% interest coupon on this bond will cease to be paid.

FS See a more detailed analysis of the group’s income statement, statement of financial position and cash flow statement for 2012 under Financial review.