Located 55km south of Laverton, the Sunrise Dam Gold Mine has two waste dumps, Cleo and Sunrise, both constructed out of waste rock generated from open pit mining operations.

The management of cyanide and waste generated during the gold production process remains an important consideration for AngloGold Ashanti. It is also a critical issue for NGOs and other stakeholders.

Cyanide is used to efficiently and cost-effectively extract gold from its host ore. It is estimated that, of the approximately 1.1 Mt of hydrogen cyanide produced annually worldwide, only 6% is used to produce cyanide reagents for gold processing.

The responsible use of cyanide is as integral a part of our ‘licence to operate’ as the systems and processes associated with the planning, management and monitoring of our environmental performance. Compliance with the International Cyanide Management Code (Cyanide Code), along with rigorous reporting, is central to this.

Our Chemical and Waste Management Standards address the management of risks arising from the use of hazardous materials, including the waste mitigation hierarchy of avoiding, reducing, reusing, recycling, treating and disposing of waste.

Like other mining companies, we generate waste rock and tailings* as a result of our mining and processing operations. During open-pit mining, large volumes of soil and/or rock (called overburden) are generated to expose the orebody.

The impact of failure of a tailings storage facility (TSF) can be significant. We, therefore, monitor these facilities closely and ensure their management is in accordance with our permits, national regulating requirements, our internal tailings management framework and agreements we may have with communities.

What we said we would do

Good progress was made by all four as-yet-unaudited operations in the implementation of the Code, although they were unfortunately not registered with the ICMI during 2012. However they, and the newly acquired Mine Waste Solutions, were registered in early 2013 and it is expected that these five operations will achieve compliance and certification by 2016.

Cyanide destruction technology is being installed at the Iduapriem mine in Ghana to reduce the weak-acid dissociable (WAD) cyanide on the tailings facility, and will be commissioned in 2013. The construction of replacement cyanide handling facilities at the Obuasi mine in Ghana was completed in late 2012, with commissioning planned for in early 2013. Both installations will facilitate compliance by these operations with the Cyanide Code. 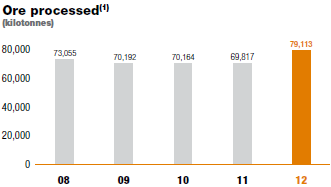 About the Cyanide Code

The Cyanide Code is a voluntary initiative for the gold mining industry and the producers and transporters of the cyanide used in gold mining. The Code was developed for gold mining operations, and addresses production, transport, storage, and use of cyanide and the decommissioning of cyanide facilities. It includes requirements related to financial assurance, accident prevention, emergency response, training, public reporting, stakeholder involvement and verification procedures. See www.cyanidecode.org.

NOx, SOx, and other significant air emissions by type and weight (EN20)

Total amounts of overburden, rock, tailings, and sludges and their associated risks (MM3)

Waste materials are produced during the mining cycle. Internal Tailings and Heap Leach Management Frameworks set the standard as well as provide guidance to which tailings and heap leach facilities must be constructed and operated. Internal geotechnical engineers are responsible for ensuring the structural stability of tailings, heap leach facilities and waste rock dumps.

During the design phase, appropriate handling and placement considerations have to be factored into the project design to ensure satisfactory protection of the environment and the safety of neighbouring communities. Risk assessments, environmental impact assessments, stakeholder engagement processes and other studies are used to identify appropriate mitigation measures and controls. During the operational phase, monitoring and audit processes are used to establish trends, identify emerging issues and to ensure conformance to the defined standard operating procedures and operating licence requirements for these various facilities, for example stability assessments, water quality and dust monitoring, hydrogeological and geochemical modelling etc., are carried out to monitor the effectiveness of the design and controls.

Closure considerations are generally broad at the design phase, continually revised throughout and finalised during the operational phase. These activities are then implemented during the closure phase (with appropriate post-closure monitoring).

The following data is presented for the first time for the 2012 financial year. LA