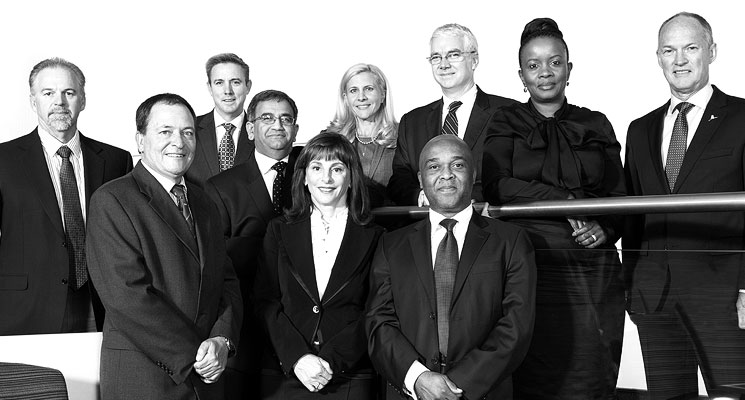 Venkat was appointed as CEO in May of 2013, having been joint CEO (with Tony O’ Neill) from April of the same year. He had previously been CFO since 2005. Venkat reports to the board and is responsible for creating, communicating and implementing the organisation’s vision, mission and strategy. His extensive knowledge of the company and its international portfolio of assets serves him well in this capacity.

With 27 years’ global mining experience, Richard was appointed CFO in June 2013 and also as an executive director in compliance with JSE Listing Requirements. His many years’ experience in positions such as EVP – Business Development, with accountability for mergers and acquisitions, as well as for greenfield exploration, and as EVP – Continental Africa, have equipped him for his current portfolio, which is to manage financial matters and decisions for the group.

Ron has more than 30 years’ experience in international mining operations and project management. He joined the organisation in 1994 as Manager, Gold Operations for Cripple Creek & Victor, and was promoted to EVP – Americas in 2007. He was subsequently promoted to Chief Operations Officer – International in 2013, and his portfolio was extended to include Continental Africa. Effective January 2014, Australia was also included in his remit. He is currently accountable for overall strategic and operational responsibilities for production at the company’s mining operations across four continents and nine countries. In addition, he leads a team mandated to remove $500m from the group’s operating cost base within an 18-month period to December 2014.

As the Chief Operations Officer – South Africa, Mike’s portfolio includes three operating areas (West Wits, Vaal River and Surface Operations). He also leads the company’s innovative technology project in South Africa. He has 37 years’ experience in mining, having joined Anglo American in 1977, and has knowledge and skills of deep underground mining that are highly regarded globally.

Holding the portfolio of Human Resources, Italia is responsible for the global people strategy at AngloGold Ashanti where it is well recognised that ‘people are the business, and our business is people’. With more than 25 years’ experience in human resources across a variety of industries, including mining, manufacturing, healthcare and banking, Italia brings a wealth of knowledge, particularly in the labour field, which is crucial to domestic and international operations. She joined the group in 2010 and is responsible for building a highly engaged and productive workforce.

Charles is responsible for the group’s strategy, business development, corporate finance, investor relations and communications portfolios. He has worked in the mining industry in South Africa and the Americas for more than 23 years and has had responsibility for a range of additional portfolios that include human resources, risk management, business planning and executive responsibility for the company’s business in Colombia.

Graham, who has multi-commodity experience, has held senior leadership positions in AngloGold Ashanti in Tanzania and Australia. His current portfolio entails safety, business process framework (BPF), asset optimisation, capital investment optimisation and monitoring of projects, studies and exploration. The Planning and Technical portfolio is his accountability.

David supports the CEO and COOs on matters relating to AngloGold Ashanti’s involvement in local and international institutions relating to sustainability. His portfolio also includes global security, infrastructure and development strategies, human rights and public affairs. Prior to joining AngloGold Ashanti in 2012, David held numerous leadership positions in the industry, most notably as CEO and MD of De Beers Consolidated Mines Ltd.

In her role as group general counsel, Maria partners with business leaders to ensure AngloGold Ashanti complies with legal requirements across the group. Other responsibilities are compliance, company secretarial functions, integrated reporting and corporate cost reduction. She is also accountable for the legal and commercial aspects of global procurement. Maria has been with the group since 2011 and has worked in similar positions for leading South African companies in her career including Investec, Sappi and Afrox.

Yedwa’s portfolio covers stakeholder relations and government relations together with global marketing and sustainability reporting. In addition, Yedwa supports the Chairman and the CEO’s offices in relation to government relations and the company’s involvement in multilateral organisations and organisations such as the World Gold Council. She joined the group in 2000 as managing secretary to the board and Executive Committee and prior to that had held senior roles in the financial and retirement industries.

Detailed curriculum vitae of members of the Executive Committee are available in the Corporate Governance section (pages 35–38) of the Annual Financial Statements 2013 and on the company website.