Headquartered in Johannesburg, South Africa, AngloGold Ashanti has 21 operations in 11 countries. Two new mines, Tropicana in Australia and Kibali in the Democratic Republic of the Congo (DRC), began production in late 2013. 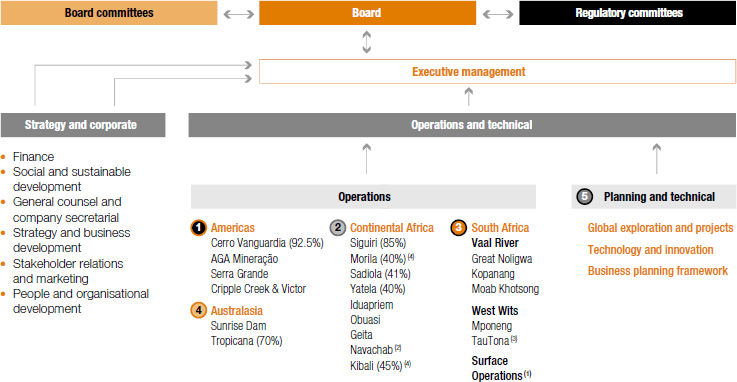 Percentages indicate the ownership interest in AngloGold Ashanti, whether held directly or indirectly. All operations are 100%-owned unless otherwise indicated.

“During 2013, a significant milestone was the start of production, within days of each other, at two new mines – Tropicana in Australia and Kibali in the DRC. Both mines came on stream ahead of schedule and within budget.”

AngloGold Ashanti is a global gold mining and exploration company with a diverse portfolio of mining operations and projects on four continents, with more than 96% of the company’s revenue derived from the sale of gold produced at its operations located around the world. Working across the full spectrum of the mining value chain, safety and the sustainability of the company’s operating activities remain a core focus for management. The company is headquartered in Johannesburg, South Africa.

Following a strategic review of AngloGold Ashanti’s asset portfolio at the start of 2013, particularly as it pertains to development and exploration projects, the company embarked on significant restructuring in response to current challenges in the gold sector, including increasing costs of production and sustained lower gold prices.

Group support functions include planning and technical, strategy, sustainability, finance, human resources, legal and stakeholder relations. The planning and technical function focuses on the management of opportunities and the maintenance of long-term optionality in the business through a range of activities which includes brownfields and greenfields exploration, innovative research, the development and technical assurance of technology and a continuing focus on mining excellence.

Despite the addition of two new mining operations, Kibali and Tropicana, which began production in the second half of 2013, the number of AngloGold Ashanti operations in 2013 remained unchanged at 21. In South Africa, following the restructuring of the portfolio, Savuka is now reported together with TauTona and MWS is included in the reporting of Surface Operations.

AngloGold Ashanti’s operations and joint ventures employed, on average, 66,434 people (including contractors) in 2013, an increase of 1% on the number employed in 2012. This increase was largely due to the increase in employee numbers resulting from Kibali and Tropicana becoming operational, which offset declines corresponding with the restructuring undertaken during the year.

Once mined, the gold ore is processed into doré (unrefined gold bars) on site and then dispatched to precious metals refineries for refining to a purity of at least 99.5%, in accordance with the standards of ‘good delivery’ as determined by the London Bullion Market Association (LBMA). This refined gold is then sold directly to bullion banks. In addition to the mining operations, AngloGold Ashanti has a 42.43% interest in Rand Refinery (Pty) Ltd, Africa’s premier gold refining and smelting complex in South Africa, and owns and operates the Quieroz refinery in Brazil. The company also has an interest in OroAfrica, one of South Africa’s leading gold jewellery manufacturing companies, through its 36% stake in Oro Group (Pty) Ltd.

By-products of our gold mining operations, a function of local geological characteristics, include silver (Argentina), sulphuric acid (Brazil) and uranium (South Africa). As sulphuric acid and uranium are potentially hazardous, the company takes great care to ensure their safe production, transport and storage.

AngloGold Ashanti’s primary listing is on the Johannesburg Stock Exchange (JSE). The company is also listed on the New York, London, Australia and Ghana stock exchanges. The Government of Ghana holds a 1.58% interest in the company.

The national governments of Mali, Guinea and the DRC hold direct interests in our subsidiaries operating in those countries. In Argentina, the province of Santa Cruz has an interest in the Cerro Vanguardia operation.