Key features of the year 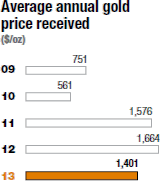 A sharp decline in the gold price in the first half of 2013 called for quick, decisive action from management to promote profitability in the near term while maintaining long-term optionality in the business. The gold price used for planning for the remaining half of 2013 and into 2014 was reduced to drive the development and implementation of an operating plan that recognised the constraints of a lower gold price. The outcome was a budget that provided an opportunity to benefit from widening margins if the price surprised on the upside. While this more conservative approach to planning has had an impact on output levels from existing mining operations, prioritising cash flow and returns remained a steadfast commitment. Management embarked on a careful review of the company’s portfolio which led to the closing of a development project in the DRC, more appropriately staged capital projects, and consolidation of management structures at the South African operations. Post year-end, AngloGold Ashanti announced it had signed a binding agreement with QKR Corporation for the sale of the Navachab mine in Namibia, subject to certain conditions. 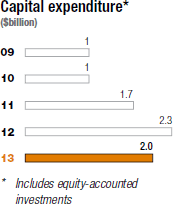 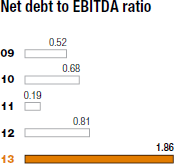 Focus has narrowed for what was historically an expansive exploration programme, leading to a withdrawal from more than a dozen countries and shifting focus to the most prospective regions in the portfolio – Australia, Colombia and Guinea – while continuing to invest in our Technology and Innovation Consortium to develop new underground mining technology in South Africa. Expensed exploration and evaluation in 2013 was $296m, $81m less than the initial budget of $377m for the year. In 2014, further savings of between $120m and $150m are anticipated.

In addition to addressing overhead costs, expenditure on projects in South Africa has been staged in an effort to better manage capital costs. Into 2014, we will aim to realise further reductions in sustaining capital by seeking efficiencies in mine planning processes, while looking to capture savings in a more benign operating cost environment. Project capital is forecast to decline in 2014 as a natural consequence of the completion of our Tropicana project and the commissioning of the open-pit mine at the Kibali joint venture.

In keeping with a prudent approach to managing the balance sheet and reducing risk, AngloGold Ashanti raised $1.25bn in July through the sale of seven-year bonds, using the proceeds to refinance the $732.5m convertible bond which was due to mature in May 2014. The debt issue alleviated refinancing risk and improved the debt maturity profile of the business.

Revenue enhancement efforts shifted during the year to improving the profitability of gold production and bringing two new world class operations, Tropicana and Kibali, into production. These two important new mines are expected to contribute approximately 550,000oz to 600,000oz of new annual production in 2014 at lower-than average costs achieved in 2013, improving the group’s cash cost profile. In 2013, these two new mines produced an attributable 106,000oz at a total cash cost of $532 per ounce.

In looking at improving the overall efficiency of the business, expenditure was addressed on several fronts: corporate costs, exploration, project and sustaining capital, and direct operating costs. At each step in this cost rationalisation process, the retention of core skills and preservation of long-term options at reasonable cost, remained a key focus.

An extensive organisational redesign took place creating a leaner leadership structure with more direct accountability. About 40% of all non-mining roles were removed from our global corporate structure, and savings in areas of indirect expenditure (1) outside of payroll were achieved. This resulted in corporate cost savings of $40m in 2013 from an initial budget of $240m. In 2014, corporate and administration expenses of $120m to $140m are anticipated. 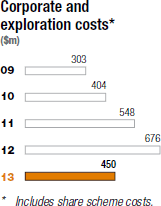 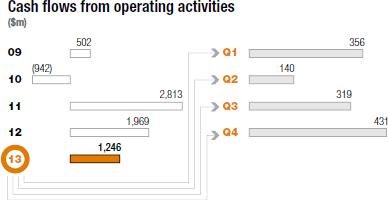 (1) Indirect expenditure is not directly attributable to production and includes corporate costs and marketing costs, among others.

Focus on people, safety and sustainability

While work to restructure the business continued at a strong pace, safety remained the number one priority. Great strides have been achieved in recent years to improve the culture of safety, and in 2013, the number of fatalities decreased by 56% year-on-year to eight, the lowest number recorded in AngloGold Ashanti’s history. South Africa made significant progress in 2013 to improve its safety performance, particularly at West Wits which had a challenging first five months of the year, but ended without a fatality in the last seven months of the year. The Vaal River operations recorded 17 consecutive months without a fatality. Despite these achievements, we recognise that there remains much room for improvement and continue to look for innovative ways to reach zero harm in the workplace. 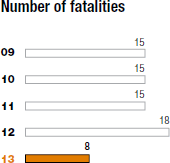 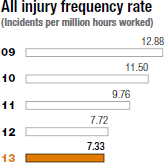 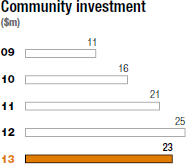 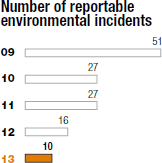