AngloGold Ashanti has a unitary board comprising 11 directors – nine independent, non-executive directors; and two executive directors. The board’s overall aim is to provide strategic leadership in ensuring the long–term sustainability and success of the business.

Membership of the board and its committees 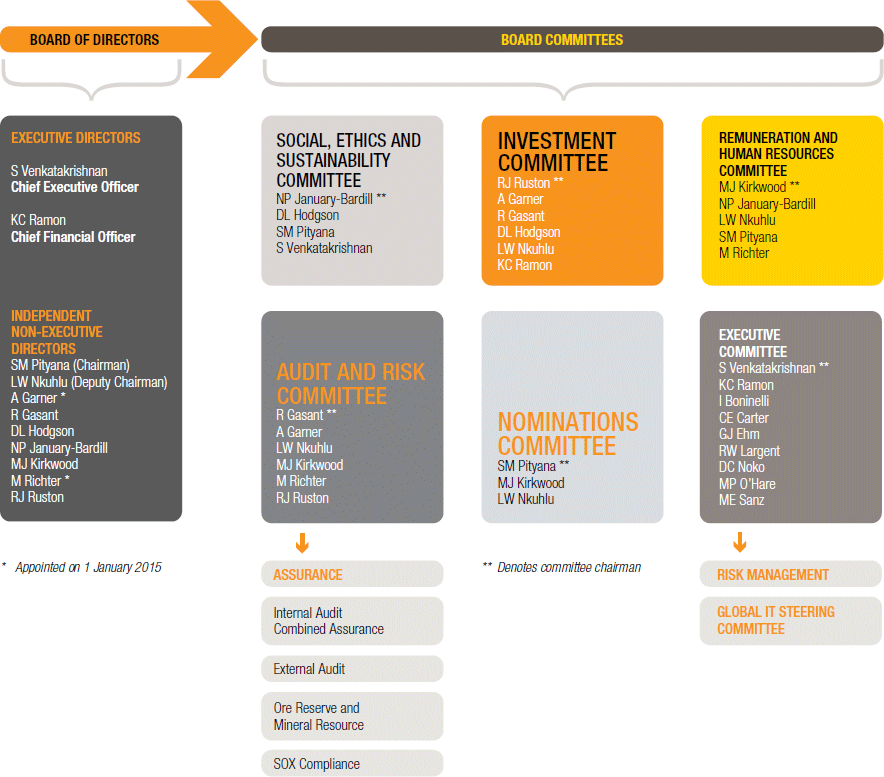 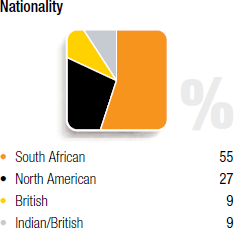 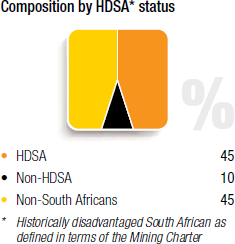 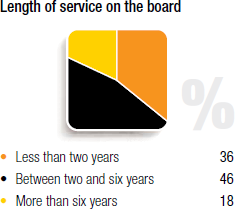 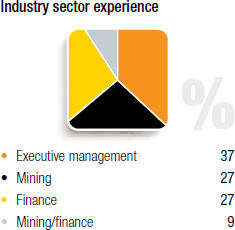 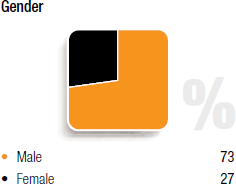 Sipho Mila Pityana is the Chairman of the Board of Directors, having assumed this role in February 2014. Sipho has extensive business experience having served in both an executive and non-executive capacity on several JSE listed boards of companies as well as running his own company, Izingwe Capital Proprietary Limited, which he chairs. He is chairman of the JSE-listed Onelogix and of Munich Reinsurance of Africa and a director of a number of manufacturing companies including Aberdare Cables. He also served on the boards of Bytes Technology Group, Afrox, SPESCOM the Old Mutual Leadership Group and Scaw Metals. He previously worked as an executive director of Nedcor Investment Bank and managing director of Nedbank.

In addition to his private sector track record, Sipho has extensive public sector experience and international exposure. He was the first Director General of the Department of Labour in a democratic South Africa. As the Foreign Affairs Director General he represented South Africa in various international fora including the United Nations, African Union, Commonwealth and the International Labour Organization. He was one of the founding members of the governing body of the Commission for Conciliation, Mediation and Arbitration (CCMA) and Convenor of the South African government delegation to the National Economic Development and Labour Council (Nedlac). He is a member of the Advisory Council of the Council for the Advancement of the South African Constitution (CASAC).

Prof Nkuhlu, a respected South African academic, educationist, professional and business leader, served as Economic Adviser to the former President of South Africa, Mr Thabo Mbeki, and as Chief Executive of the Secretariat of the New Partnership for Africa’s Development (Nepad) from 2000 to 2005. From 1989 to 2000, he served as a director on a number of major South African companies or subsidiaries, including Standard Bank, South African Breweries, Old Mutual, Tongaat, Hulett, BMW and JCI. Prof Nkuhlu was president of the South African Institute of Chartered Accountants from 1998 to 2000 and principal and vice chancellor of the University of Transkei from 1987 to 1991. He is currently a member of the Board of the Ethics Institute of South Africa, Datatec Limited, the Nepad Business Foundation and the Chartered Director Governing body of the Institute of Directors in South Africa. He was elected president of the Geneva-based International Organisation of Employees (IOE) in May 2008 and served for two years. Lastly, he is a trustee of the International Financial Reporting Standards Foundation which provides oversight of the accounting standard setting operations of the International Accounting Standards Board (IASB).

Venkat was appointed CEO on 8 May 2013, after holding the position of joint acting CEO from April of that year. He was previously Chief Financial Officer (CFO) at Ashanti Goldfields until its merger with AngloGold in May 2004, creating what is now AngloGold Ashanti. Venkat became CFO of the combined entity shortly after the merger and joined the board on 1 August 2005. He is chairman of the Executive Committee and also a member of the Social, Ethics and Sustainability Committee.

In his role as CFO, he oversaw funding for all of AngloGold Ashanti’s operating activities, giving him a detailed knowledge of all of our mines and operating jurisdictions. He is a member of the Financial Reporting Investigation Panel, an advisory panel of the JSE. He was the executive responsible for eliminating a 12Moz hedge book, generating significant value for the company, and was the key executive behind rebuilding the balance sheet through a series of successful debt financings that introduced long-term tenor and more favourable funding terms to the company’s credit profile. During Venkat’s first year as CEO of AngloGold Ashanti, two new mines were commissioned on time and ahead of budget, the company achieved its best ever safety performance and a significant restructuring was undertaken of operating and overhead costs in order to focus the business on delivery of sustainable free cash flow and returns. Venkat was also previously a director of corporate reorganisation services at Deloitte & Touche in London.

Appointed to the board as CFO on 1 October 2014

Christine is a member of the South African Institute of Chartered Accountants and the Association for the Advancement of Black Accountants of South Africa. She served previously as a member of the Standing Advisory Committee to the International Accounting Standards Board and currently serves as Deputy Chair of the Financial Reporting Standards Council of South Africa. Christine’s current portfolio includes finance and treasury, insurance services, internal audit, taxation and information technology.

Appointed to the board on 1 January 2015

Albert Garner has extensive experience in capital markets, corporate finance and mergers and acquisitions having worked with Lazard Frères & Co., LLC for 35 years in various leadership positions. He is one of the most senior bankers at Lazard, currently leading their special committee practice and chairing their fairness opinion committee. He formerly led Lazard’s corporate finance practice. Albert became a general partner in 1989 and is now Vice Chair – US Investment Banking. Over the past 10 years he has advised and acted as lead adviser to more than 50 companies and their boards of directors on transformative transactions.

Rhidwaan Gasant is the former Chief Executive Officer of Energy Africa Limited, and sits on the boards of international companies and chairs the Audit and Risk Committees of international companies in the MTN Group. He is currently Chief Executive Officer of Rapid African Energy Holdings, a start-up oil and gas exploration company, focused on Africa.

Dave Hodgson formerly held a series of senior and executive positions over three decades with the Anglo American and De Beers group of companies, and also held the post of Chief Operating Officer of AngloGold Ashanti from November 2001 through to his retirement in April 2005. In addition, he has held non-executive directorships at Moto Gold Mines Limited, Uranium One Inc., Goliath Gold Mining Limited, Auryx Gold Corporation, Montero Mining and Exploration Limited, and Acacia Mining.

Appointed to the board on 1 October 2011

Nozipho January-Bardill was an Executive Director, Corporate Affairs and spokesperson of the MTN Group where she also served on the boards of a number of operations in the MTN footprint. She is a former South African Ambassador to Switzerland, Lichtenstein and the Holy See, and former Deputy Director General, Human Capital Management and Head of the Foreign Service Institute in the then Department of Foreign Affairs (now DIRCO).

She is currently the founder and executive director of Bardill & Associates, a consulting company focusing on strategic communications, high-level government relations, stakeholder management and gender equality in the workplace. She serves on the board of Credit Suisse Securities, Johannesburg and is also a member of the United Nations Expert Committee on the Elimination of Racial Discrimination and was recently appointed Interim Chief of Staff of UN Women in New York.

Michael Kirkwood is a highly experienced and respected former international banker, having worked at the highest levels of Citigroup during his 30-year career with the bank. He is currently chairman of Circle Holdings PLC and a senior advisor (former chairman) of Ondra Partners LLP. He formerly served on the boards of Kidde plc, UK Financial Investments Ltd, Eros International plc and as deputy chairman on PwC’s Advisory Board. He also previously served as chairman of British American Business Inc., as president and a fellow of The Chartered Institute of Bankers and as deputy chairman of the British Bankers Association.

Appointed to the board on 1 January 2015

Maria Richter is an experienced FTSE 100 non-executive director who has served on a diverse range of UK and International boards. She previously served on the board of National Grid plc in the UK from 2003 to July 2014 where she was the chairperson of the finance committee and member of the audit and nominations committees. She currently sits on the boards of Rexel Group, France, a global leader in the professional distribution of energy products and services, and Bessemer Trust, a US wealth management company, and is a member of the audit and compensation committees of Rexel and the remuneration committee of Bessemer Trust. She also serves on the board of Pro Mujer International, a women’s microfinance network and is chairman of the board of trustees of Pro Mujer UK. Maria’s professional career spanned 1980 to 2002 during which time she served in various positions at the former Dewey Ballantine, Prudential, Salomon Brothers Inc. and Morgan Stanley & Co.

Appointed to the board on 1 January 2012

Rodney Ruston holds a degree in mining engineer and an MBA and has over 35 years of business experience during which he has led private and publicly-listed companies in the resources, oil and gas and construction industries. His international experience as the chief executive of a heavy construction supply contractor coupled with chief executive roles with operating resource companies provides the board with a broad based director, who can provide insight and advice on the full range of domestic and international activities in the AngloGold Ashanti business. Rodney is currently the chief executive of County Coal Limited, a start-up Australian listed company, which he joined in July 2012. He was previously chief executive officer and President of North American Energy Partners Inc., a large Canadian mining and construction contracting company, which he took public with a listing on the NYSE and the TSX. Prior to that he was managing director of Ticor Ltd, an Australian-based titanium producer with operations in Australia and South Africa.

Refer to Executive management for a description of the responsibilities of the company secretary.