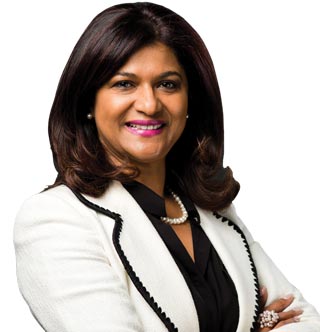 Delivered on consistent production and cost guidance amidst continuing adverse market conditions. Our focus remains on strengthening the balance sheet in the medium term and creating a prudent buffer for volatility.

The year under review was marked by a further fall in the gold price, which decreased by $137/oz or 10% over the course of the year. The impact of the drop in the gold price has been proactively managed and the 2014 results reflect consistent operational and cost performance. It is the second consecutive year of growth in gold production, with an overall 8% increase being recorded year-on-year. At the same time, all-in sustaining costs per ounce improved by 13% year-on-year.

Significantly lower year-on-year total cash and all-in sustaining costs were achieved through the combination of production and overall cost improvements reflecting the first full year of operations at our two new low-cost mines (Kibali and Tropicana). In addition, our efforts to tackle costs across a broad front underpinned the improvement in margins, through the Project 500 (P500) initiative, reductions in direct operating costs, corporate overheads and exploration costs, and strict capital allocation.

We continue to focus on ‘self-help measures’ in three areas: 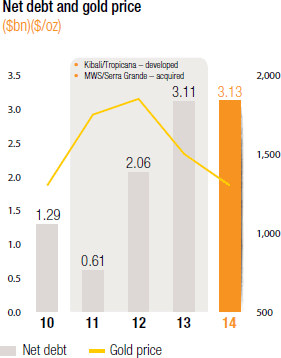 One of our five core strategic focus areas is to ‘ensure financial flexibility’ which means structuring our balance sheet to allow us to meet our core funding requirements and to provide a reasonable buffer for gold price volatility as well as other adverse unforeseen events. To ensure continued flexibility in the debt maturities schedule, refinancing of the group’s revolving credit facilities (RCFs) was completed mid-year. The new $1bn RCF and A$500m RCF were agreed during July 2014 for a further five-year period. In addition, a looser financial covenant was concluded, with the net debt to adjusted EBITDA covenant at 3.5 times (previously 3 times), with one six month period waiver of up to 4.5 times, subject to certain conditions. The $ and A$ RCFs have also been priced tightly, to reflect the current financial market conditions. The looser covenant is also applicable to the ZAR RCF.

AngloGold Ashanti’s credit rating was reviewed by both Moody’s Investor Service and Standard and Poor’s (S&P), to Baa3 with a negative outlook and BB+ with a negative outlook, respectively. The Moody’s rating places the company at the lowest level of investment credit grade and S&P has the company at the top level of sub-investment credit grade. These ratings remained unchanged.

The group’s balance sheet is highly geared and efficiently structured and the debt has longdated maturities. Apart from the R750m bond maturing in 2016 and the R1.5bn RCF which matures in December 2018, the earliest international bond maturity date is in April 2020. The high-yield bond ($1.25bn: 8.5%) issuers’ call can only be exercised from July 2016 onwards, at the group’s discretion, allowing sufficient time for the group to explore any ‘self-help measures’ ahead of any options around refinancing or early redemption being assessed. The conclusion of a potential asset sale and joint venture partnerships should help the group determine whether or not to exercise the high yield bond call option.

Our medium term leverage target is 1.5 times net debt to adjusted EBITDA. We would like to reduce our debt by approximately $1bn to take us to our comfort threshold which would include a reasonable buffer for volatility, including the gold price risk and production disruptions.

Our aim is to achieve this debt reduction through a variety of 'self-help measures' as elaborated above. Importantly we are under no external pressure to achieve this. This is an aspirational target that can be achieved over the next few years.

The temporary relaxation of the banking covenant of 4.5 times net debt to adjusted EBITDA expired with the June 2014 testing period, while the $ and A$ revolving credit facilities are set to mature within the next five-year period. The group therefore moved prudently and proactively to manage its financial flexibility and steps taken in this regard included:

Looking ahead to 2015, the key financial objectives are to:

We are expecting our debt levels to remain steady at the end of 2015, taking into account our estimated production, planned expenditures at budgeted exchange rates and commodity and fuel price assumptions, although it may increase slightly in the first half due to free cash flow profiling in South Africa from production and capital expenditure fluctuations. This excludes any proceeds from asset sales or joint venture partnerships that we may consider pursuing or the impact of any operational or other disruptions.

In addition to a strong leverage to the gold price, our group’s operations also leveraged to both the weaker average global currencies and the lower average oil price, which benefits our cash costs. In 2014, the drop in the gold price was partially offset by weaker global currencies and the lower average oil price. In addition, the combination of just over 70% of the group’s adjusted EBITDA from our international operations emphasises our geographical diversification and resilience to unforseen production disruptions in the South African region.

The company has initiated a plan to identify a joint venture partner or a purchaser in respect of its interest in the CC&V mine in Colorado in the United States for full value. The CC&V gold mine is a surface mining operation which provides oxidised ore to a crusher and valley leach facility, one of the largest in the world. It is included in the Americas reporting segment and was acquired by AngloGold Ashanti in 1999. The mine produced 211,000 ounces of gold in 2014. There can be no assurance, however, that a sale and purchase agreement for this transaction will be entered into or that any sales transaction will be completed.

The company currently intends to dispose of its 41% stake in Sadiola and its 40% stake in Yatela. The mines are both situated in western Mali and are included in the Continental Africa reporting segment. The Sadiola and Yatela mines produced 85,000 and 11,000 attributable ounces of gold, respectively, in 2014.

Management was approached by a potential buyer for both mines who meets management’s qualifying criteria and has asked for a binding bid. There can be no assurance, however, that a sale and purchase agreement for these transactions will be entered into or that any sales transactions will be completed.

I took over the role of Chief Financial Officer at AngloGold Ashanti with effect from 1 October 2014. The transition from my predecessor Richard Duffy was seamless, thanks to a strong and diligent financial team in the group. Our team, through their understanding of the challenging economic and financial pressures, has helped us proactively manage the financial position of the company. In addition, we have been able to deliver quality financial information to our stakeholders which reflects our objectives and values for long-term success. I would like to thank our strong and enthusiastic financial team in the group for their ongoing support and look forward to the year ahead.