AngloGold Ashanti Limited (Registration number 1944/017354/06) was incorporated in the Republic of South Africa in 1944 and operates under the South African Companies Act No. 71 of 2008, as amended, with a primary listing on the JSE in South Africa.

AngloGold Limited was founded in June 1998 with the consolidation of the gold mining interests of Anglo American. The company, AngloGold Ashanti as it is now, was formed in April 2004 following the business combination of AngloGold Limited (AngloGold) with Ashanti Goldfields Company Limited (Ashanti).

AngloGold Ashanti is an independent gold producer with a diverse spread of shareholders comprising the world’s largest financial institutions. 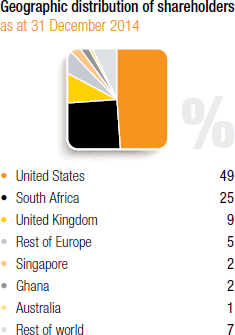 Shareholders are reminded that the onus is on them to keep the company, through their nominated share registrars, apprised of any change in their postal address and personal particulars. Similarly, where shareholders receive dividend payments electronically (EFT), they should ensure that the banking details which the share registrars and/or CSDPs have on file are correct.

The 2014 suite of annual reports is available on this, the corporate reporting website, www.aga-reports.com. 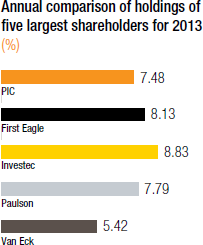 In line with the Mining Charter’s requirement that, by the end of 2014, mining companies should have achieved ownership of 26% by historically disadvantaged South Africans (HDSAs) (also referred to as BEE ownership) in the attributable units of production of a company’s South African assets.

In compliance, AngloGold Ashanti has enabled HDSA ownership of 26.8% of its South African assets, broken down as follows: 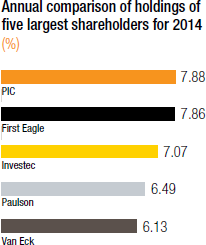 Dividends are proposed by, and approved by the board of directors of AngloGold Ashanti, based on the company’s financial performance. It is to be noted that no dividends have been declared since the first quarter in 2013. AngloGold Ashanti expects to resume paying dividends, although there can be no assurance that dividends will be paid in the future or as to the particular amounts that will be paid from year to year. The payment of future dividends will depend upon the board’s ongoing assessment of AngloGold Ashanti’s earnings, after providing for long-term growth, cash/debt resources, compliance with the solvency and liquidity requirements of the Companies Act the amount of reserves available for a dividend based on the going-concern assessment, and restrictions (if any) placed by the conditions of debt facilities, protection of the investment grade credit rating and other factors.

On 1 April 2012, the South African government imposed a 15% withholding tax on dividends and other distributions payable to shareholders.

Shareholders on the South African register who have dematerialised their shares in the company (other than those shareholders whose shareholding is recorded in their own names in the sub-register maintained by their CSDP) and who wish to attend the annual general meeting to be held on 6 May 2015 in person, will need to request their CSDP or broker to provide them with the necessary authority in terms of the custody agreement entered into between them and the CSDP or broker.

The Companies Act provides that if voting is by a show of hands, any person present and entitled to exercise voting rights has one vote, irrespective of the number of voting rights that person would otherwise be entitled to. If voting is taken by way of poll, any shareholder who is present at the meeting, whether in person or by duly appointed proxy, shall have one vote for every share held.

There are no limitations on the right of non-South African shareholders to hold or exercise voting rights attaching to any shares of the company. CDI holders are not entitled to vote in person at meetings, but may vote by way of proxy.